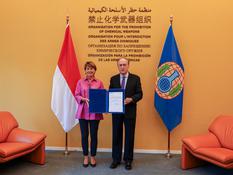 On 24 September 2020, H.E. Ms Isabelle Berro-Amadeï presented her Letters of Credence to the OPCW’s Director-General, Mr Fernando Arias, accrediting her as Ambassador and Permanent Representative of the Principality of Monaco to the Organisation for the Prohibition of Chemical Weapons (OPCW).

The official ceremony took place at the OPCW Headquarters in The Hague and was followed by a private meeting during which a number of different subjects were discussed. These included the impact of the health crisis on the organisation’s work, monitoring the elimination of chemical weapons stocks in Syria and countering the illegal sale of chemical agents via the dark web.

H.E. Ms Berro-Amadeï thanked the Director General for his unwavering commitment within the OPCW, whose work is essential in neutralising the threat to international peace and security posed by chemical weapons.

The Ambassador and Permanent Representative then signed an agreement with the Director-General renewing the Principality of Monaco’s voluntary contribution to the OPCW’s Trust Fund for Syria Missions.

Monaco’s financial contribution to the Trust Fund will support work to eliminate Syria’s chemical weapons arsenal, the deployment of the Fact-Finding Mission and investigations to determine responsibility for chemical attacks carried out against the population.