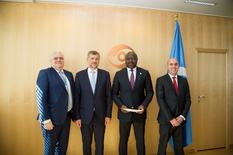 On 9 September 2020, in Vienna, H.E. Mr. Frédéric Labarrere presented Mr. Rafael Mariano Grossi, Director General of the International Atomic Energy Agency (IAEA), with his letters of appointment as Representative of the Principality of Monaco.

The ceremony was followed by a private meeting, during which the Director General set out the priorities of the IAEA.  He emphasised Monaco's role within the Agency, in particular thanks to the presence on Monegasque territory of the Agency's Marine Environment Study Laboratory, which is due to celebrate its 60th anniversary in 2021.  The Director General welcomed the recent appointment of Mrs Florence Descroix Comanducci, who is of Monegasque nationality, as head of this facility.

Mr. Grossi also paid tribute to the commitment of H.S.H. the Sovereign Prince to preserving the marine environment and combating climate change, to which the Agency contributes through various scientific and technical co-operation programmes.  He thanked the Prince's Government for its long-standing support for the Agency's cancer therapy programme.

For his part, H.E. Mr. Frédéric Labarrere assured the Director General of the full support of the Principality of Monaco for the Agency's activities, welcomed initiatives to promote sustainable development objectives and expressed his desire to continue the historic relations of co-operation between Monaco and the IAEA.

In the afternoon, the Ambassador presented his letters of appointment to Mr. Lassina Zerbo, Executive Secretary of the Comprehensive Nuclear-Test-Ban Treaty Organization (CTBTO), in his capacity as Permanent Representative of the Principality of Monaco.

During the meeting that followed the ceremony, the Executive Secretary outlined the Organization's activities and the functioning of the international monitoring system which, by means of more than 300 monitoring stations and analysis laboratories, carries out measurements aimed at detecting nuclear tests.  It can also detect earthquakes, which often cause tsunamis.  He thanked the Prince's Government for its partnerships with the CTBTO with regard to tsunami warning activities and strengthening monitoring capacity in French-speaking Africa.

The Ambassador then praised the work undertaken by the Organization, in particular the continuation of numerous activities during the pandemic.  He expressed the hope that co-operation between Monaco and the CTBTO could be increased.

*:  The IAEA is universally known as the global body of "Atoms for Peace and Development" within the United Nations family, and is an international centre for cooperation in the nuclear field.  Today, the IAEA is comprised of 171 Member States.  It was founded in 1957, at which time the Principality of Monaco joined.

**:  Established in Vienna in 1997, the Provisional Technical Secretariat of the Preparatory Commission for the Comprehensive Nuclear-Test-Ban Treaty Organization (CTBTO) is the body responsible for preparing for the entry into force of the Comprehensive Nuclear-Test-Ban Treaty (CTBT).  The CTBTO depends in particular on an international monitoring system that determines if a nuclear explosion has occurred.  This system also helps to prevent tsunamis and other natural disasters and contributes to scientific research on the marine, terrestrial and atmospheric environment through data collection.