Partnership between Government and Sciences Po Paris: “Vulnerable children in Africa and the MENA region” 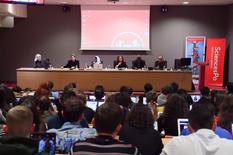 As part of the partnership between the Monegasque Government and Sciences Po, the Department of International Cooperation organises an annual “Winter School” at the Sciences Po Middle East-Mediterranean Campus in Menton. The aim is to raise first-year students’ awareness of the challenges associated with development aid and international solidarity.

The 2019 Winter School, the theme for which is “Vulnerable children in Africa and the MENA* region”, today held a round table which brought together international experts such as Dr Jean-Baptiste Richardier, Co-founder of Handicap International, Geneviève Wills, the World Food Programme’s representative to France and Monaco, and Dr Luciano Tuseo, Malaria Officer at the World Health Organization.

Children’s health and nutrition were the focus of the discussions which took place in front of 130 students representing 50 different nationalities. Food security is a new theme for the Department of International Cooperation.

A series of round tables, thematic small-group workshops, and lectures will continue throughout the week, with the involvement of partners of Monaco’s Official Development Assistance.

The Winter School is an annual highlight of the partnership between the Prince’s Government and Sciences Po.