Opening of Diplomatic Relations between the Principality of Monaco and Namibia 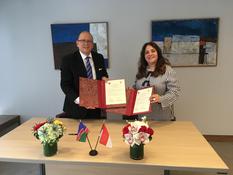 On Thursday 12 September 2019, Namibia became the 146th State with which the Principality of Monaco has established diplomatic relations, following the signing of joint communiqués by the Permanent Representatives to the United Nations, H. E. Mr. Neville Gertze and H. E. Ms. Isabelle Picco.

This southern African country is very active in combating desertification, seeing the Namib Desert grow, while water resources are decreasing.  The Authorities are developing renewable energies, despite the high cost due to a small population.

Namibia has been a member of the United Nations since its independence in 1990 and is committed to being an active player in multilateralism and human rights.  It is one of the countries that provide troops for peacekeeping operations.

Monaco’s Department of International Cooperation supports the World Health Organization (WHO) in eliminating malaria in 8 countries in Southern and Eastern Africa, including Namibia.