New Ambassador of the Principality of Monaco to Germany presents credentials 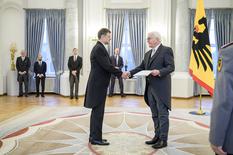 H.E. Mr Frédéric Labarrère presented his credentials to the President of the Federal Republic of Germany, Mr Frank-Walter Steinmeier, on Tuesday 7 January 2020.

The official ceremony was held in the halls of Bellevue Palace in Berlin, the President’s official residence.

During a private meeting that followed the ceremony, the German President welcomed H.S.H. the Sovereign Prince’s commitment to protecting the environment and particularly the oceans. He noted that there were strong areas of convergence with the German Government’s efforts in this area. For his part, the Ambassador expressed his wish to pursue and promote stronger cooperation between the Principality of Monaco and the Federal Republic of Germany.