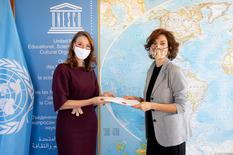 On Wednesday 9 February 2022, the new Ambassador and Permanent Representative of the Principality of Monaco to UNESCO, H.E. Anne-Marie Boisbouvier, presented her credentials to the UNESCO Director-General Audrey Azoulay.

The official ceremony took place at the headquarters of the UN organisation in Paris.

During their meeting after the ceremony, Audrey Azoulay hailed the work of H.S.H. Prince Albert II and Monaco on the oceans, noting how much it was appreciated by UNESCO. She thanked the Principality for its support, particularly in the fields of international development (Monaco funds a UNESCO programme in Burundi that seeks to promote school attendance for vulnerable children, especially girls) and Holocaust education (Monaco contributes to International Holocaust Remembrance Day).

After congratulating the Director-General on her recent re-election for a second four-year term, the Ambassador talked about the actions being taken in the Principality to counter the impact of the pandemic, particularly in the field of education, one of the areas on which UNESCO focuses. She recalled H.S.H. Prince Albert II’s involvement in the Decade of Ocean Science for Sustainable Development (2021–2030) and the commemorations of the centenary of Prince Albert I’s death, an event added to the UNESCO calendar during the organisation’s most recent General Conference in November 2021.

The Director-General was keen to discuss themes of shared interest and practical actions which could be jointly implemented to respond to the four challenges of education, our relationship with the living world, social cohesion and peace, and mastering technology in service of humanity.

H.E. Anne-Marie Boisbouvier concluded by highlighting the importance which the Principality attaches to multilateralism and the relevance of UNESCO’s work in response to contemporary challenges, through open science, education for all and the promotion of a diverse culture, which is a vector for prosperity and helps to bring people together.