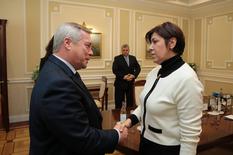 Mr Vasily Golubev, Governor of Rostov Region, and H.E. Ms Mireille Pettiti, Ambassador of the Principality of Monaco to the Russian Federation. © DR

On 12 November 2018, H.E. Ms Mireille Pettiti, the Principality of Monaco’s Ambassador to the Russian Federation, visited Rostov-on-Don to make preparations for the cultural and economic events to be held in the city in 2019.

The Governor of Rostov Region, Mr Vasily Golubev, received the Ambassador to discuss some of these projects, including the visit of a Monaco Economic Board mission in September 2019, the presentation of the “Monaco, Artists’ Stories” exhibition, and the Principality’s participation in the Rostov Film Festival.

Rostov-on-Don is an economic, industrial and scientific centre with a population of more than 1.1 million. It is the capital of Russia’s Southern Federal District. Mr Andrei Myshkovets has represented the Principality of Monaco as Honorary Consul in the city since January 2015.