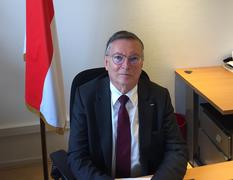 Strengthening Actions for Nature to Achieve the Sustainable Development Goals is the theme for the fifth United Nations Environment Assembly (UNEA-5) which opened with a virtual session on 22 February 2021. A Monegasque delegation led by Professor Alain Piquemal, Monaco’s Permanent Representative to the United Nations Environment Programme (UNEP), took part in the meeting and in the preparatory work done by the Committee of Permanent Representatives, which met on 15–16 February.

During these discussions held via videoconference, the Principality participated in the high-level dialogue that brought together ministers of the environment and international figures, and focused on the environmental aspect of sustainable development and its impact on the effort to build a resilient and inclusive world once the pandemic is over.

In his speech, Professor Piquemal noted the measures that Monaco has taken to safeguard biodiversity within its territory, to restore nature to the city and to reduce plastic waste. His message, addressed to representatives of more than 90 States, reaffirmed the commitment of H.S.H. the Sovereign Prince and His Government to reconciling the Principality’s economic development with protecting the planet.

UNEA-5 will resume in February 2022, when it will tackle the issues that could not be covered in a virtual format.

Monaco’s contribution during the high-level dialogue is available on YouTube: https://youtu.be/-ro3bTVONsg?start=12559&end=12877