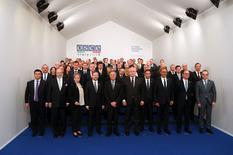 Mr Gilles Tonelli, Minister of Foreign Affairs and Cooperation, took part in the 25th Ministerial Council of the Organisation for Security and Cooperation in Europe (OSCE), which was held in Milan on 6 and 7 December 2018. He was accompanied by H.E. Ms Isabelle Berro-Amadeï, Ambassador and Permanent Representative of the Principality of Monaco to the OSCE, and Mr Lorenzo Ravano, First Counsellor at Monaco’s Embassy in Berlin.

In his speech, Mr Tonelli congratulated the Italian Presidency of the OSCE for its efforts throughout 2018 to promote constructive dialogue on sensitive issues and propose new areas of cooperation.

In particular, he hailed the courageous and determined work of the OSCE Special Monitoring Mission to Ukraine to try and ease tensions in the region.

Reaffirming the Principality of Monaco’s commitment to international law and the protection of human rights, Mr Tonelli highlighted the need for concerted action on the part of all states to make tangible progress in tackling the major international challenges currently facing our societies.The Minister also stressed that it was critical to maintain dialogue on subjects likely to promote opportunities for interaction and sharing of best practices. In this regard, the OSCE Mediterranean Conference held in Malaga in October had shown that the theme of energy transition, one which is particularly important to the Principality, could produce positive synergies between nations.