Ahead of celebrations to mark Mediterranean Day on 28 November, a day launched by the Union for the Mediterranean (UfM), Monaco’s Embassy in Spain held a conference on “The future of the Mediterranean: the challenge of protecting its environment” in conjunction with IE University Madrid.

Mr Santiago Íñiguez, the President of IE University, offered his sincere thanks to H.E. Ms Catherine Fautrier. He emphasised that this was an important issue for young people, and highlighted that it was vital to involve them in this field, where creativity and innovation were essential.

The various panellists expressed their views on how to tackle the challenges faced by countries on the northern and southern shores of the Mediterranean in protecting their environments and populations, while continuing to pursue economic development.

Mr Isidro González Afonso, Deputy Secretary-General of the UfM, noted the key role played by the UfM in this area. At the recent Summit on the Environment and Climate Action, member states adopted an action plan that seeks to put in place numerous measures to protect this sensitive region.

H.E. Mr Bernard Fautrier, Special Advisor to H.S.H. the Sovereign Prince on Environmental Issues, sent a recorded message in which he emphasised the crucial need to act and highlighted the many specific initiatives taken by the Principality of Monaco in this area (MedFund, BeMed, etc.).

Ms Lucile Courtial, Secretary-General of Beyond Plastic Med (BeMed), a Monegasque initiative launched in 2015, explained the various innovative actions being taken to combat the plastic invasion in the Mediterranean.

Ms Purificacio Canals, President of the Mediterranean Network of Marine Protected Areas (MedPAN), emphasised the benefits of marine protected areas which, when managed effectively, are an investment and a sanctuary for biodiversity.

To conclude, Alexander Van de Putte, Professor of Strategy and Strategic Foresight at IE University, discussed how the Mediterranean could become a vector for the development of renewable energy, and stressed that protecting the environment is a key factor in ensuring geopolitical stability.

Finally, Monaco’s Embassy was keen to involve in the discussions two Spanish artists who are committed to environmental protection: Luis Prieto Moreno, founder of the MadBlue Summit and the Piel de Atun movement, and Pepe Monserrate, a sculptor. 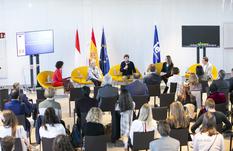