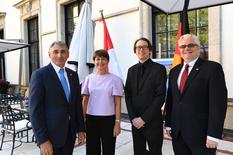 Monaco’s Embassy in Germany held its traditional reception to mark the anniversary of H.S.H. Prince Albert II’s accession on 3 July 2018. More than 200 guests were invited to a buffet and cocktail reception at the splendid Patrick Hellmann Schlosshotel in Berlin.

Among the guests were the Chief of Protocol from the German Federal Foreign Office, the Apostolic Nuncio, the Mayor of Gotha (the town in central Germany which H.S.H. Prince Albert II visited in 2016), the Director of the German Ocean Foundation, members of the Monaco International German Club, Monaco’s Consuls in Germany, the Consul of Monaco in Poland, and a large number of foreign ambassadors based in the German capital.

In her speech, H.E. Ms Isabelle Berro-Amadeï, Monaco’s Ambassador to Germany, addressed some key topics for the Principality. She emphasised Monaco’s ongoing efforts on environmental issues, notably driven by the Sovereign Prince and his personal commitment to the cause. She also discussed the Mission for Energy Transition, the challenge presented by the offshore urban extension project and, finally, the digital transition, highlighting the MonacoTech incubator and the development of a smart city in Monaco.

During the morning, the annual meeting with the Consuls of Monaco in Germany and Poland was held at the Chancery, followed by an informal lunch.