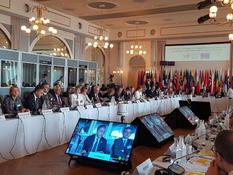 H.E. Mr Rémi Mortier, Ambassador and Permanent Representative of the Principality of Monaco to the Council of Europe, accompanied by his deputy, represented the Minister of Foreign Affairs and International Cooperation at the 128th Council of Europe Ministerial Session, held on 17 and 18 May in Helsingør (Elsinore), Denmark.

This high-level annual meeting brought together foreign ministers and senior officials from the 47 member states of the organisation to debate how to promote respect for human rights and basic freedoms, guarantee the long-term effectiveness of the European Convention on Human Rights system, and strengthen democratic security in a Europe which is facing multiple challenges.

In spite of the crises rocking the continent and the numerous threats to the rule of law, the Secretary General recalled that the key objective of the organisation is to consolidate unity and ensure that human rights are effectively secured at the European level. He called on nations to build on the gains made by the Council of Europe, and to grant the organisation a mandate appropriate to the current circumstances as it approaches its seventieth anniversary in 2019.

In his speech, the Ambassador reaffirmed the Prince’s Government’s political and financial support for the Council of Europe. He also hailed the organisation’s critical role as a platform for dialogue and cooperation between nations in order to ensure effective protection of the human rights of more than 800 million European citizens, particularly through the European Court of Human Rights.

During the session, ministers also adopted an amending protocol to update the Convention for the Protection of Individuals with Regard to Automatic Processing of Personal Data, the only legally binding international instrument in this area, so that it is able to meet the challenges posed by the use of new information and communications technologies.