Monaco in the spotlight in Tokyo 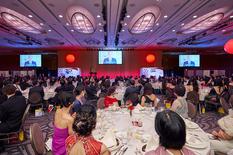 The French Chamber of Commerce and Industry in Japan sought to showcase the Principality of Monaco during its annual gala in Tokyo on 4 November.

Despite the unusual health situation, the socially distanced event brought together a number of high-profile figures, including the French Ambassador, the Dean of the Diplomatic Corps, senior officials from the Ministry of Foreign Affairs and numerous leaders from the worlds of Japanese business, culture and sport.

H.S.H. Prince Albert II made an appearance via video, offering a message of solidarity and faith in the future.

An auction was then held to raise funds to support Franco-Japanese research on infectious diseases and COVID-19. H.E. Mr Patrick Médecin, Monaco’s Ambassador to Japan, also awarded the top raffle prize – a trip to Monaco for two people – to a lucky winner.

The evening had a Monegasque theme, with decorations designed in partnership with the Tourist and Convention Authority office in Tokyo and the Monegasque Consulate in Japan. The menu was devised by Mr Christian Garcia, Head Chef at the Prince’s Palace, and executed with assistance from Japanese chef Mr Nobuhiko Fukuda.

The gala concluded with the screening of Wake Up!, a film produced by the Ballets de Monte-Carlo during lockdown, in lieu of the originally planned performance in Tokyo.