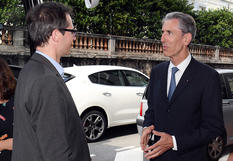 Philip Bittner, Counsellor at Austria’s Permanent Representation to the EU and current Chair of the Working Party on the European Free Trade Association, and Gilles Tonelli, Minister of Foreign Affairs and Cooperation

Minister of Foreign Affairs and Cooperation Gilles Tonelli today welcomed the Council of the European Union's Working Party on the European Free Trade Association (EFTA), which is in the Principality for a study visit until 7 September.

The Working Party, which previously paid an initial visit to Monaco in June 2013, is made up of diplomats from the 28 EU member states, as well as representatives from the Council Secretariat and the European External Action Service (EEAS). One of its roles is to follow up negotiations aimed at concluding an association agreement between Monaco and the EU.*

Starting tomorrow, the members of the Working Party will undertake a series of visits, meetings and working sessions with the Prince’s Government, the Principality’s institutions, and several representatives from the private sector (see attached programme).

The visit, organised at the initiative of the Prince’s Government, seeks to present and explain to key European interlocutors the geographical and demographic realities that apply to Monaco, as well as the Principality’s unique institutional, economic and social features.