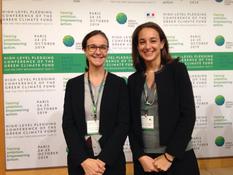 A Monegasque delegation took part in the high-level conference organised by the Green Climate Fund in Paris on 24 and 25 October 2019, during which developed countries were invited to announce their contributions to the replenishment of the Fund for 2020–2023.

A key instrument of the United Nations Framework Convention on Climate Change financial mechanism, the Fund aims to channel a significant portion of international public funds to assist implementation of the Paris Agreement in developing countries.

The Fund has been operational since 2015 and has already allocated more than USD 5 billion in funding to support 111 projects in nearly 100 countries, with a focus on least developed countries and small developing island states, who are the first victims of climate change. Seeking to strike a balance between mitigation and adaptation, the projects that are currently underway aim to prevent the emission of 1.5 billion tonnes of CO2 equivalent and to strengthen the resilience of more than 310 million people in the face of climate change.

The current replenishment hopes to secure sufficient resources to ensure that it can continue to operate for the next four years.

Having supported the Fund since it was first created, the Prince’s Government has reaffirmed its faith in this international financial instrument by announcing a contribution of EUR 3 million for the period 2020–2023. The Principality has also encouraged the Fund to build its capacity in order to maximise its impact on behalf of the most vulnerable.

With this commitment, Monaco is following the example of France, Germany and the United Kingdom, which have also renewed their support for the Fund.