Monaco at the 74th session of the UN General Assembly 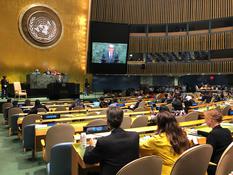 H.S.H. the Sovereign Prince at the 74th session of the UN General Assembly

The General Debate of the 74th session of the United Nations General Assembly was held from 24 to 30 September 2019 in New York. In his speech, H.S.H. the Sovereign Prince reiterated his Government’s commitments on environmental protection and multilateralism.

Five high-level meetings were organised in the margins of the traditional ministerial week, during which three major declarations were adopted.

On 23 September, H.S.H. Prince Albert II took part in the Climate Action Summit. The aim of the summit was to establish specific actions and accelerate efforts to implement the Paris Agreement. H.S.H. the Sovereign Prince gave a speech in which he set out the Principality’s commitments and highlighted the IPCC’s work on the oceans and cryosphere: “Is it conceivable to envisage implementation of the SDGs without fully recognising the scale of the impact climate change will have on the ocean?”

The previous weekend, the Summit had been dedicated to the younger generations as the first Youth Climate Summit was held. Young people were invited to address the UN before a number of high-level representatives, including Mr Gilles Tonelli, Minister of Foreign Affairs and Cooperation.

The Youth Climate Summit came the day after a global mobilisation for the climate which brought together more than 250,000 young activists in the streets of New York, and 4 million across the world.

A declaration on Universal Health Coverage was adopted. This is the first global agreement on universal health and provides solid support for SDG 3. It states that access to high-quality, affordable healthcare which meets the needs of each individual is a universal international right. In addition, the declaration seeks to encourage progress on treating communicable diseases, notably HIV/AIDS, tuberculosis and malaria, as well as non-communicable diseases and antimicrobial resistance.

Mr Tonelli attended the High-level Dialogue on Financing for Development on 26 September. This was the first dialogue of this kind since the adoption of the Addis Ababa Action Agenda, and brought together more than 20 heads of state and government, ministers and representatives from the worlds of business and philanthropy, including the Bill & Melinda Gates Foundation. All attendees expressed their disappointment with the inadequate pace of efforts to achieve the SDGs. They restated their determination to mobilise resources, encourage action and re-establish the momentum needed to eliminate poverty and promote prosperity and wellbeing while protecting the environment.

Five years after the adoption of the Samoa Pathway, designed to support sustainable development in small island developing states, a mid-term review assessed progress made on addressing the devastating effects of climate change and building economic and environmental resilience.

During their week at the UN, H.S.H. the Sovereign Prince and the Minister, accompanied by the Principality of Monaco’s Permanent Representative to the United Nations, held bilateral meetings with Crown Prince Haakon and the Minister of Foreign Affairs from Norway, and with the President of Palau, Tommy Remengesau Jr., to discuss their shared vision and their commitments on protecting the oceans and tackling climate change. Mr Tonelli also held meetings with his counterpart from the Marshall Islands and with the Secretary-General of the Union for the Mediterranean.

On the margins of the Climate Action Summit, the Minister presented a specific example of a nature-based solution: the educational marine area established in the Principality. He spoke at an event titled “The Ocean in a Changing Climate: Towards a Solutions Platform” on the IPCC report and COP25, and at another event, “Blue Leaders Call to Action on Ocean and Climate”, which emphasised the urgency of the need to safeguard the oceans. Mr Tonelli took advantage of the Francophone Evening to give participants an update on the holding of the next Ministerial Conference of La Francophonie in the Principality. He also met the Executive Director of the Green Climate Fund to announce the Principality of Monaco’s contribution of EUR 3 million over four years.

Finally, the Minister used his time at the United Nations to offer the Principality’s support to a number of coalitions, including those on the climate and the air, and the Alliance for Multilateralism launched by France and Germany.