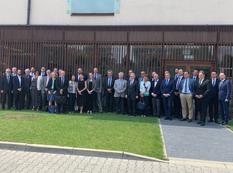 H.E. Ms. Isabelle Berro-Amadeï, Ambassador of Monaco to Poland, accompanied by Anne Fantini, Counsellor, took part in the 9th session of the International Committee of the Auschwitz-Birkenau Foundation, held on 18 June 2019 at Auschwitz.

This meeting, which is usually scheduled for the autumn in Warsaw, was held this year at the site of the Auschwitz II-Birkenau Memorial, to coincide with the official opening ceremony of the first brick barracks building, which has been completely renovated by the Foundation's Endowment Fund to preserve the remains of the former Nazi German camp.

To mark the Foundation's tenth anniversary, Monaco has made a contribution to the Perpetual Fund for the occasion, thus expressing its support for the various measures taken to preserve the memorial site.

On 27 January 2020, the 75th anniversary of the liberation of the Auschwitz-Birkenau camp will be commemorated, and a Monegasque delegation is expected to attend.

The Principality became a member of the International Committee of the Auschwitz-Birkenau Foundation following an official visit to the site in 2012 by T.S.H. Prince Albert II and Princess Charlene.