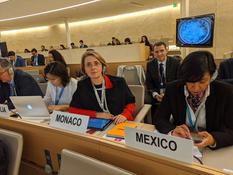 On Thursday 3 October 2019, the 17th Meeting of States Parties to the Convention against Torture and Other Cruel, Inhuman or Degrading Treatment or Punishment was held at the Palace of Nations in Geneva.  The Principality was represented by H.E. Ms. Carole Lanteri, Ambassador, Permanent Representative of Monaco to the United Nations Office at Geneva, who had chaired the Meeting of States Parties in 2017 and was succeeded by H.E. Ms. Ravesa Lleshi, Ambassador, Permanent Representative of Albania to the United Nations Office at Geneva.

The main objective of this conference was to elect five members of the Committee against Torture (CAT).  The CAT is comprised of 10 independent experts, and monitors compliance with the Convention by States Parties, which submit periodic reports to it at regular intervals.  The Principality's last examination by the CAT took place in November 2016.

As proof of the international community's commitment to this issue, a large number of candidates were presented this year.

As a reminder, the Convention against Torture was adopted under the auspices of the United Nations on 10 December 1984 and entered into force on 26 June 1987.  It was ratified by the Principality on 6 December 1991.  There are currently 168 States Parties to this Convention.

By acceding to this international treaty, States undertake to adopt practical measures to prevent torture within their borders.  They also undertake not to return a person to a State where he or she could be subjected to torture.