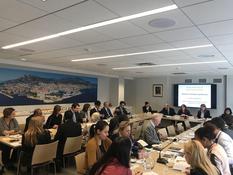 On Wednesday 27 March, the Permanent Mission of Monaco in New York was host to the Group of Friends on Drowning Prevention, at its premises.  Various dignitaries took part in the discussions, including Ms. Gemma May, head of the British NGO the Royal National Lifeboat Institution (RNLI), Drs. Werner Obermeyer of the WHO-New York and Raoul Bermejo of UNICEF, as well as the representative of Thailand, who gave a presentation on the significant progress made following the involvement of her country's Authorities.

In her welcoming speech, H.E. Ms. Isabelle Picco, Ambassador, Permanent Representative of the Principality of Monaco to the United Nations, recalled the importance of learning to swim at an early age and cited the partnership between the Princess Charlene of Monaco Foundation and the RNLI.

The discussions among the 40 delegations present were an opportunity to identify practical measures leading to a better understanding of this "silent killer," which is responsible for more than 360,000 deaths per year.  Delegations were invited to address this subject at the UNICEF Executive Board, the WHO Executive Board and the WHO World Assembly next May, and also at the High-Level Policy Forum and the High-Level Meeting on Universal Health Coverage, to be held at the United Nations in September.