Monaco Attends the 62nd Session of the IAEA's General Conference 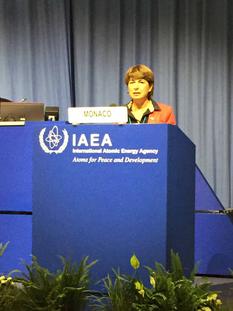 H.E. Ms. Isabelle Berro-Amadeï, Ambassador, Permanent Representative of Monaco to the IAEA, accompanied by Ms. Anne Fantini, Counsellor at the Embassy of Monaco in Germany, took part in the 62nd session of the General Conference of the International Atomic Energy Agency (IAEA), held at the Vienna International Centre in Vienna, Austria, from 17 to 21 September 2018.

H.E. Ms. Isabelle Berro-Amadeï gave a speech at the plenary session of this meeting on behalf of the Principality of Monaco.  The Ambassador emphasised that the peaceful applications of nuclear energy have a major role to play in sustainable development and the environment, and reiterated Monaco's full support for the IAEA's activities in the field of nuclear technologies for research into and the preservation of the climate.

Recognising that combating climate change is the greatest environmental challenge that humanity faces, the IAEA's  Science Forum focused this year on the theme of "Nuclear Technology for Climate:  Mitigation, Monitoring and Adaptation."

Finally, H.E. Ms. Berro-Amadeï concluded her address by pointing out that the year 2018 marks the 20th anniversary of the installation in their current premises of the IAEA's Environmental Laboratories in the Principality.*  This anniversary will be celebrated in Monaco on 19 October 2018 in the presence of many dignitaries and will once again highlight the close ties between the Agency and the Principality.

* The IAEA's Environmental Laboratories, founded in 1961 in Monaco, were originally located in the premises of the Oceanographic Museum.