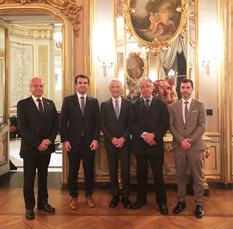 On 11 April, the Destination Monaco Ambassadors Club of Florence met in the historic setting of the Hotel Villa Cora. The aim of the Club is to bring together prominent Italians from all walks of life who are motivated by their love of the Principality and are committed to promoting the destination through their professional and personal relationships.

H.E. Mr Robert Fillon, Monaco’s Ambassador to Italy, and Mr Alessandro Giusti, Monaco’s Consul in Florence, welcomed participants and reminded them of the role of Destination Monaco Ambassadors in promoting conference tourism in the Principality of Monaco and in developing business contacts. They also hailed the dynamism shown by the Florence Club and the variety of sectors – both economic and cultural – that are represented within it.

The meeting was also attended by the Prefect of Florence, as well as by the Director of Monaco’s Chamber of Commerce, a Monaco Economic Board entity, and the Director of Monaco Tech. The latter two came to Italy to forge and expand contacts in Tuscany, where the dense and diverse business community includes companies operating in the new technologies sector.

Two new ‘Ambassadors’ were appointed during the course of the evening.

Groups of Destination Monaco Ambassadors have formed around the Principality’s Consuls in Italy. The Club now has 230 members in 12 major Italian cities.