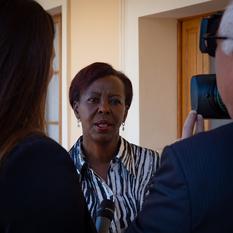 As part of preparations for the 36th session of the International Organisation of La Francophonie (IOF) Ministerial Conference, which will be held in the Principality on 30 and 31 October, H.S.H. Prince Albert II today granted an audience to Ms Louise Mushikiwabo, the IOF Secretary-General, at the Prince’s Palace.

On the sidelines of their meeting, Monaco Info asked the new Secretary-General, who has officially been in post since 3 January following her election at the end of the Yerevan Summit in October 2018, for her impressions. Ms Mushikiwabo stressed the importance of the Ministerial Conference, which will bring together the 88 member states and governments of the organisation at the Grimaldi Forum in Monaco – a total of 450 people are expected to attend.

“The IOF Ministerial Conference prepares the ground for the summit attended by heads of state and government. It is therefore extremely important. This year, our theme [Reconciling Humanity and the Planet: Prospects within the French-Speaking World as the IOF Turns 50 – Ed.] focuses on awareness of our planet, which is also a key topic for the Monegasque authorities,” Ms Mushikiwabo said.

“It will be my first Ministerial Conference, and I hope to take advantage of it to connect or reconnect with ministers from the French-speaking world and, above all, to share with them the adjustments and changes I would like to bring in as the new Secretary-General, particularly with a view to the November 2020 Summit in Tunis, which will be our fiftieth anniversary summit.”

Pictures of Ms Mushikiwabo’s audience with the Prince can be found on the Prince’s Palace of Monaco Facebook page.

You can watch the full interview with the Secretary-General on Monaco Info’s news bulletin this evening.