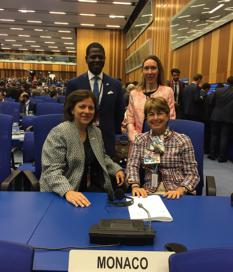 From left to right: In the foreground:  Ms. Isabelle Rosabrunetto, Director General of the Ministry of Foreign Affairs and Cooperation and H.E. Ms. Isabelle Berro-Amadeï, Ambassador, Permanent Representative of Monaco to the IAEA

In the background:  Mr. Tidiani Couma, Secretary of External Relations and Ms. Anne Fantini, Counsellor at the Embassy of Monaco in Germany ©DR

A Monegasque delegation took part in the 63rd session of the General Conference of the International Atomic Energy Agency (IAEA), held in Vienna, Austria, from 16 to 20 September 2019.

In her address to the plenary session, Ms. Isabelle Rosabrunetto, Director General of the Ministry of Foreign Affairs and Cooperation, paid tribute to Mr. Yukiya Amano, Director General of the IAEA, who died last July, and his outstanding work at the UN Agency.  She stated that Monaco would continue to support, insofar as its means allow, the important efforts of the international community with regard to peaceful applications of nuclear science and technology, particularly in the fields of the environment and health.

Ms. Rosabrunetto recalled that the Principality has hosted the IAEA's environmental laboratories in its territory since 1961 and regularly contributes to the financing of the Programme of Action for Cancer Therapy (PACT), which was established by the Agency.  The aim of this programme is to develop and improve cancer care and capacity in developing countries in a sustainable manner in order to maximise therapeutic outcomes.

Isabelle Rosabrunetto announced increased financial support for the Agency's new initiative on women's cancers, which was launched at the IAEA's Scientific Forum on the theme of "A Decade of Action on Cancer Control and the Way Forward."