H.S.H. the Sovereign Prince participates in 33rd International Conference of the Red Cross and Red Crescent in Geneva 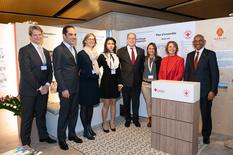 Heading a Monegasque delegation comprising representatives from the Prince’s Government and the Monaco Red Cross, on Monday 9 December 2019 H.S.H. the Sovereign Prince attended the opening ceremony of the 33rd International Conference of the Red Cross and Red Crescent, which is underway in Geneva until 12 December 2019.

Focused this year on the theme “Act Today, Shape Tomorrow”, this quadrennial conference brings together the entire Red Cross movement (national societies, the International Committee of the Red Cross (ICRC) and the International Federation of Red Cross and Red Crescent Societies (IFRC)), as well as the states who are party to the Geneva Conventions (which are this year marking their seventieth anniversary), to reflect and take decisions on major humanitarian issues.

During the opening ceremony, H.E. Ms Carole Lanteri, Ambassador and Permanent Representative of Monaco to the Office of the United Nations in Geneva, was elected President of the Commission on “International humanitarian law: protecting people in armed conflict”. This election was a first for Monaco and is a mark of the entire movement’s confidence in the Principality and recognition of its commitment to strengthening respect for international humanitarian law.

Finally, in the margins of the event, H.S.H. Prince Albert II visited the new premises of the IFRC, which is celebrating its centenary, and met the President of the Federation, Mr Francesco Rocca, and its Secretary-General, Mr Elhadj As Sy. 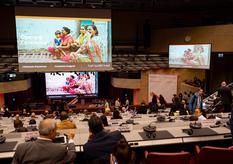