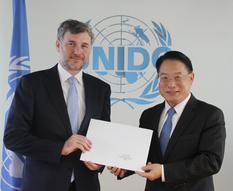 The two ceremonies were followed by cordial meetings between the Monegasque delegation and the representatives of the two international bodies.

During the first meeting, Ms Ghada Fathi Waly, who took up post as head of the United Nations Office in Vienna on 3 February this year, expressed the UNODC’s gratitude for the projects supported by the Prince’s Government, and specifically those focused on strengthening criminal justice in the Sahel region and combatting human trafficking in Senegal.

At the second meeting, Mr Li Yong welcomed the good relationship that currently exists between UNIDO and the Principality of Monaco. He set out the priorities of the organisation, which he has led since 2013, laying particular emphasis on efforts to combat poverty and the need for urgent cooperation to tackle the “climate crisis”. Mr Li also welcomed Monaco’s commitment in these areas.

Ambassador Labarrère assured his interlocutors of Monaco’s full support for the principles of multilateralism, international cooperation and the mandates of these international organisations.

UNODC was founded in 1997 and is at the forefront of global efforts to combat illegal drugs and international crime. It is also the body responsible for the United Nations’ counterterrorism programme.

The mission of UNIDO is to promote and accelerate inclusive and sustainable industrial development in the organisation’s member states.