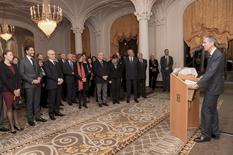 On Thursday 10 January, Gilles Tonelli, Minister of Foreign Affairs and Cooperation, delivered his New Year address to the Diplomatic and Consular Corps accredited to the Principality.

Those attending the ceremony included H.E. Mr Serge Telle, the Minister of State, and Georges Lisimacchio, Head of H.S.H. the Prince’s Cabinet.

After thanking the ambassadors, French Ambassador H.E. Ms Marine de Carne-Trecesson,
Italian Ambassador H.E. Mr Cristiano Gallo, the Ambassador of the Order of Malta, and the foreign consuls in Monaco for their work during 2018, the Minister looked back over the highlights of the year. He noted H.S.H. the Sovereign Prince’s trip to Burkina Faso for the opening of the Red Cross training centre in Loumbila and the Prince’s meeting with Chinese President Xi Jinping, as well as the visit of the President of Cape Verde to Monaco.

Mr Tonelli reminded his audience that the Principality is represented abroad by 16 ambassadors accredited to 28 states, and he welcomed the accreditation for the first time in 2018 of a Monegasque Ambassador to the Republic of Malta. Seven new honorary consuls were also appointed: in Europe (Marseille, Turin, Düsseldorf, Ljubljana), the Americas (Atlanta and Valparaiso) and Oceania (Port-Vila, Vanuatu).

The Principality currently has a network of 138 active consuls in 80 countries around the world.