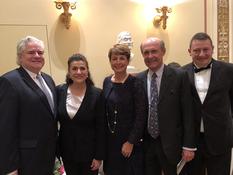 As part of their European tour, dedicated to Antonio Vivaldi, Cecilia Bartoli and Les Musiciens du Prince*, under the musical direction of Gianluca Capuano, gave two concerts, on 10 May at the Prinzregententheater in Munich and on 13 May at the Musikverein in Vienna.

To mark the occasion, the Embassy of Monaco in Austria, the Monaco Economic Board (MEB) and the representative office of Monaco Tourist and Convention Authority (DTC) in Austria, invited sixty or so well-known figures from the diplomatic and economic fields.

Following the performance to a packed house, H.E. Ms. Berro-Amadeï, Ambassador of Monaco to Austria, held a reception in honour of Cecilia Bartoli and Les Musiciens du Prince.   Approximately a hundred dignitaries were present, including Thomas Angyan, Director of the Musikverein, Christian Dorda, Honorary Consul of Monaco in Austria, Franz Ceska, President of the Friends of Monaco Club (Club des Amis de Monaco) in Austria, Guillaume Rose, Executive Director General of the Monaco Economic Board (MEB), Guy Antognelli, Director of Monaco Tourist and Convention Authority, and many Ambassadors accredited in Austria.

On the following day, an MEB trade mission was organised for a delegation from Monegasque businesses, in association with Advantage Austria (the Austrian business promotion organisation) and the "Wirtschaftskammer Österreich" (WKÖ - Austrian Chamber of Commerce).

*:  The Cecilia Bartoli and Les Musiciens du Prince ensemble was founded in 2016 at the Monte-Carlo Opera on the initiative of Cecilia Bartoli, with the assistance of Jean-Louis Grinda, Director of the Opera, and the support of H.S.H the Sovereign Prince and H.R.H. the Princess of Hanover.