Diplomacy: three new Ambassadors from Slovenia, Peru and Niger, and appointment of General Delegate of Quebec 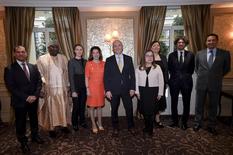 H.E. Ms Cristina Ronquillo De Blodorn joined the Department of Political Affairs in Peru in 1976 and held posts within the Ministry of Foreign Affairs and at various embassies, including in Europe. From the 2000s, she was appointed Minister Counsellor for the Special Commission on Administrative Modernisation in the Directorate General for Consular Affairs, Minister for the Sub-Directorate for Economic Affairs and International Negotiations, then Minister and Director for Hemispheric and Global Economic Relations at the Under-Secretariat for Economic Affairs. Promoted to Ambassador and Deputy Director of the Diplomatic Academy of Peru in 2005, she was then appointed as Peru’s Ambassador to the Kingdom of Belgium from 2011 to 2016.

Having joined Niger’s Ministry of Foreign Affairs and Cooperation in 1987, H.E. Mr Ado Elhadji Abou was appointed Head of the United Nations and International Conferences Department before being promoted to Director for the Middle East and Arab Nations. In 2005, he took on the role of Diplomatic Advisor then Deputy Secretary General to the President of the Republic. He also served as Minister Counsellor at Niger’s Embassies in Abuja and Brussels. In 2013, he was appointed to serve as his country’s Ambassador to the Swiss Confederation, Liechtenstein and Austria.

An economist by education and an associate professor at HEC Montréal, Ms Michèle Boisvert was Executive Vice-President, Business Outreach at the Caisse de Dépôt et Placement du Québec (CDPQ) investment fund, while also serving as Executive Vice-President, Public Affairs and Strategic Communications from 2012 to 2015. During her most recent term of office, she was responsible for all entrepreneurial initiatives and provided CDPQ with a regional presence, supporting the investment teams. Until her appointment, Ms Boisvert was President of the Fondation de la Place des Arts and the Fondation du Centre Jacques-Cartier, and Deputy Chair of the Board of the Université de Montréal.