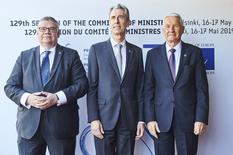 The meeting, which was held on 16 and 17 May in Helsinki, brought together the foreign ministers of the Council’s 47 member states. It was opened by the President of the Republic of Finland, Sauli Niinistö, at a ceremony to mark the organisation’s seventieth anniversary.

During the meeting, ministers adopted a political declaration reaffirming the rights and obligations of each member state. They highlighted the need to put in place a mechanism for coordinated action with the Parliamentary Assembly. This would enable it to react more effectively in the event that a member state fails to comply with its statutory obligations or the fundamental principles upheld by the Council of Europe. A key aim of this new mechanism is to resolve the crisis that the organisation is experiencing as a result of Russia’s lack of participation in the work of the Parliamentary Assembly.

In his speech, Gilles Tonelli reiterated the Principality of Monaco’s support for the Council of Europe and the core values that it advocates. He also backed the recommendations set out in the Report by the Secretary General, Ready for Future Challenges – Reinforcing the Council of Europe, while emphasising his commitment to the organisation’s long list of achievements.