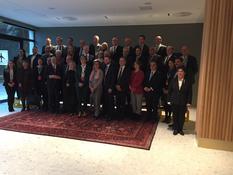 A Monegasque delegation* took part in the 17th Ministerial Conference of the Co-operation Group to Combat Drug Abuse and Illicit Trafficking in Drugs (Pompidou Group), which took place in Stavanger, Norway, on 27 and 28 November 2018, on the theme of "Sustainable drug policies that respect human rights."

This is the first time that Monaco has taken part in a Pompidou Group Ministerial Conference.  In January 2016, the Principality became the 38th member State of this Partial Agreement of the Council of Europe (which was created on the basis of an initiative launched in 1971 by President Pompidou).  The main mission of the Agreement is to contribute, in its member countries, to the development of effective drug policies based on recognised expertise.

At this event, H.E. Mr Rémi Mortier, Ambassador, Permanent Representative of Monaco to the Council of Europe, highlighted the commitment of the Prince's Government to addressing the drug problem, with due respect for basic rights and human rights, the rule of law and the right of universal access to healthcare.  He recalled that, in Monaco, in the field of public health, preventative work with young people is a priority, particularly in schools.  Finally, he mentioned the interest shown in the work of the Pompidou Group, in particular in addressing the challenges posed by new psychoactive substances and by the sale of illicit substances via the Internet.

At this Conference, which is held every four years, Portugal took over from Norway as Chair of the Group.  A four-year work programme was adopted, based on three priorities:  good governance, the development of international drug policies, and new challenges, including the growing threat of addiction to the Internet and online gambling.