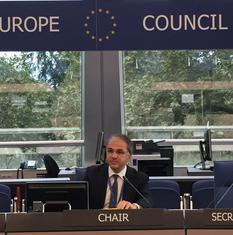 H.E. Mr Rémi Mortier, Ambassador and Monaco’s Permanent Representative to the Council of Europe, has been appointed to chair the Rapporteur Group on External Relations © DR

On 3 July 2019, H.E. Mr Rémi Mortier, Ambassador and Monaco’s Permanent Representative to the Council of Europe, was appointed by the 47 member states of the Committee of Ministers to chair the Rapporteur Group on External Relations (GR-EXT).

Rapporteur groups are subsidiary groups of the Ministers’ Deputies. They prepare decisions for adoption by the Committee of Ministers. There are eight of them in total, and they are thematically based, each covering different areas within the Council of Europe’s scope of competence.

GR-EXT is responsible for cooperation with major international organisations, such as the United Nations, the European Union, the OSCE, and the International Organisation of La Francophonie (IOF). It also leads on the policy on cooperation with regions neighbouring the Council of Europe, and relations with observer states.

In entrusting chairmanship of GR-EXT to H.E. Mr Mortier, the Committee of Ministers has acknowledged Monaco’s strong commitment to the Council’s neighbourhood cooperation policy: the Principality has been actively involved in promoting this policy, which seeks to maintain an enhanced dialogue with the countries concerned and to develop a common legal space. In addition, since 2012 the Prince’s Government has made voluntary contributions to support certain programmes implemented as part of the neighbourhood cooperation policy, and specifically those that benefit Southern Mediterranean countries. Monaco’s neutrality on the international stage, its commitment to strong multilateralism, and its status as a non-member state of the European Union which is nonetheless fully involved in the work of the Council of Europe were also seen as valuable.

This is the first time since joining the Council of Europe in 2004 that Monaco has chaired a rapporteur group. H.E. Mr Mortier will begin his two-year term at the helm of GR-EXT in September 2019.