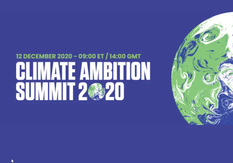 To mark the fifth anniversary of the Paris Climate Agreement, H.S.H. Prince Albert II spoke at the Climate Ambition Summit, a virtual event jointly organised on 12 December by the United Kingdom, France and the United Nations Secretariat, with support from Chile and Italy.

Conscious of the need to maintain a high level of ambition on climate issues ahead of COP26, which will be held in Glasgow in November 2021, having already been pushed back a year due to the COVID-19 pandemic, the Climate Ambition Summit provided an opportunity for more than 70 heads of state and government to present their national commitments in the fight against climate change. Only countries announcing genuine advances in their national strategies were allowed to speak, in order to keep the focus on their actions.

It was in this context that the Sovereign Prince unveiled Monaco’s new target to cut greenhouse gas emissions by 55% by 2030, compared with 1990 levels. This replaces the initial target, set in 2015, of a 50% reduction over the same period. H.S.H. the Prince also took this opportunity to confirm the Principality’s commitment to achieving carbon neutrality by 2050, and to maintaining a high level of international funding to strengthen the adaptation and mitigation capacities of the countries that are most vulnerable to climate change.

These new commitments, made before the international community, once more reaffirm H.S.H. the Prince’s and the Principality’s dedication to the global effort to combat climate change.