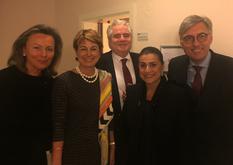 As part of their tour showcasing the music of the eighteenth century, Cécilia Bartoli and the Musicians of the Prince of Monaco* performed a sold-out concert at the Berlin Philharmonic on 25 November. The performance was conducted by Maestro Gianluca Capuano.

The opera singer and orchestra performed some of the most exquisite arias in the eighteenth-century operatic repertoire and were met with rapturous applause from the fifty or guests invited by Monaco’s Ambassador to Germany. Following the performance, the Ambassador hosted a reception, which was attended by Jean-Louis Grinda, Director of the Monte-Carlo Opera, Barbara Zumbaum, Monaco’s Honorary Consul in Potsdam, the Head of Protocol for the State of Berlin, the Apostolic Nuncio and ambassadors accredited in Germany.

In her speech, Monaco’s Ambassador to Germany H.E. Ms Isabelle Berro-Amadeï recalled that “for more than a century, the Principality of Monaco has helped to write some of the most illustrious pages in the history of art and music. Today, the country is a booming centre for creativity and expression. This evening, thanks to the talent of Cécilia Bartoli and the Musicians of the Prince of Monaco, the Principality is a shining star in the musical world.”

* The Cécilia Bartoli and the Musicians of the Prince of Monaco ensemble was created at the Monte-Carlo Opera in 2016 at the initiative of Cécilia Bartoli with assistance from Director Jean-Louis Grinda and the support of H.S.H. the Sovereign Prince and H.R.H. the Princess of Hanover.