Bilateral Relations with China Signing of an Agreement to Benefit Diplomats 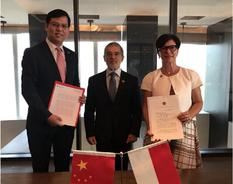 From left to right:  The Representative of the Ministry of Foreign Affairs;  Mr. Patrice Cellario, Minister of Interior and H.E. Ms. Catherine Fautrier, Ambassador of Monaco to China ©DR

As part of the Official Visit of H.S.H. the Sovereign Prince to China, an Agreement on visa exemptions for travel by holders of diplomatic passports was signed with the People's Republic of China.

At his meeting with H.S.H. the Sovereign Prince, held in the presence of H.E. Ms. Catherine Fautrier, Ambassador of Monaco to China, and the Monegasque delegation, President Xi Jinping welcomed the signing of this agreement, which facilitates diplomatic relations between the two countries.

The Agreement was established in the form of an exchange of Notes Verbales between the Principality of Monaco and the People's Republic of China on 7 September 2018 in Beijing, and will enter into force on 8 October 2018.