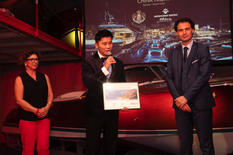 It was back to the Riva Tunnel in Monaco on 27 September for the 7th China Night, held to coincide with the 29th Monaco Yacht Show.

Organised under the aegis of the Embassy of Monaco in China with support from the Monaco Boat Service Riva Exclusive Dealer for France and Monaco, this event has, over time, become an unmissable part of the Monaco Yacht Show, a key partner of China Night.

2019 has been an historic year in diplomatic relations between the People’s Republic of China and the Principality of Monaco, marked by the state visit of Chinese President Xi Jinping and his wife. On 24 March, they were welcomed by T.S.H. Prince Albert II of Monaco and Princess Charlene at the Prince’s Palace, where an official lunch was held following a private meeting between the two heads of state and their wives and a bilateral meeting involving representatives from the two governments.

China Night in 2019 took place in this extremely positive context, with the number of Chinese visitors to the Principality having increased exponentially since the beginning of the year. As a direct result of the state visit, Air China has operated a thrice-weekly direct flight between Nice and Beijing since 2 August.

On the back of the successful gala dinner held in 2018 in the Riva Tunnel, a legendary spot in the Principality, Monaco’s Ambassador to China, H.E. Ms Catherine Fautrier, and the President of Monaco Boat Service Riva Exclusive Dealer for France and Monaco, Ms Lia Riva, were keen to recreate this event in a location full of symbols representing the history of Monegasque yachting.

Finally, China Night 2019 was absolutely delighted to welcome two Chinese stars: actor Li Chen and singer G.E.M. Both thoroughly enjoyed their stay in Monaco, and Li Chen was awarded the title of Destination Ambassador by Guy Antognelli, Director of the Tourist and Convention Authority. G.E.M. took advantage of her visit to Monaco to film the video for her latest single, so the Principality will feature on Asian music channels. 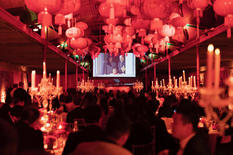