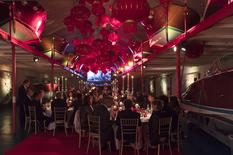 Monaco’s sixth China Night was held in the Riva Tunnel on 27 September 2018 as part of the 28th Monaco Yacht Show.

Organised under the aegis of the Embassy of Monaco in China, this event has, over time, become an unmissable part of the Monaco Yacht Show, a key partner of China Night. Bolstered by this success, this year’s China Night introduced a new concept to give the event a more exclusive feel. For 2018, the Principality’s legendary Riva Tunnel played host to the China Night private dinner held in collaboration with RIVA Monaco Boat Service and the Tourist and Convention Authority.

Following on from H.S.H. Prince Albert II’s state visit to the People’s Republic of China from 5 to 8 September, the 6th China Night marks a turning point in Chinese–Monegasque relations. As noted by Monaco’s Ambassador to China, H.E. Ms Catherine Fautrier, “relations between China and Monaco are now extremely strong in a number of areas, showing that the difference in the size of the two countries is no barrier to collaboration.”

Numerous partnerships have been established between the two nations, such as the one which has for several years linked the Principality and Hantang Culture in the field of communications. Hantang Culture provides coverage in China of events like the Monaco Yacht Show and the Rose Ball, and is also the exclusive media partner for the Grimaldi Forum exhibition ‘Princes and Princesses of Monaco’, which is on display in the Forbidden City until 11 November.

In the areas of telecommunications and high technology, Monaco Telecom has signed a partnership with Huawei on the launch of 5G in Monaco. Finally, the yacht builder Riva, which is part of Monaco’s heritage, now has links to China’s Weichai Group

At the heart of these collaborative efforts, China Night 2018 brought together representatives from these various organisations with Chinese guests visiting the Principality for the Monaco Yacht Show.