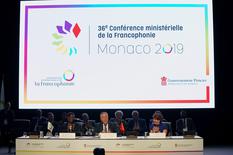 After two days of fruitful discussions at the 36th Ministerial Conference of La Francophonie (CMF), H.E. Ms. Louise Mushikiwabo, Secretary General of La Francophonie, expressed her great satisfaction when closing the session, declaring at the final press conference, "Since yesterday morning, at the delightful ceremony prepared by our host country until the closure today, this ministerial session was full of dynamism and focused on the changes we are planning."  She emphasised that "this ministerial session agreed to changes in the Organisation.  We are now already involved in preparations for the 18th La Francophonie Summit in Tunis ... I leave Monaco with a song in my heart."

Against this background, the conference came to a close with the transfer of the Presidency from Armenia to Tunisia.  In his speech, the new President, Mr. Sabri Bachtobji, Acting Tunisian Minister of Foreign Affairs, sincerely thanked the Principality for its warm welcome and invited the great family of La Francophonie to Tunis in November 2020.