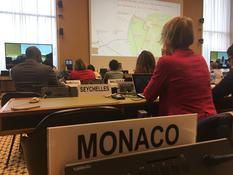 Monaco is taking part in the second meeting of the ad hoc open-ended expert group on marine litter and microplastics from 3 to 7 December 2018 in Geneva.

The mandate of the expert group is to explore all of the barriers to combatting marine litter and microplastics. It was established by resolution 3/7 of the United Nations Environment Assembly, the UN’s primary environmental governance body.

The work of this group is directly linked to the international community’s efforts to combat plastic waste in the marine environment.

Its second meeting is focused on a discussion of the barriers and challenges involved in combatting plastic pollution in the oceans, with a view to eventually identifying solutions that can be acted on at the international level.

Its conclusions will be reviewed at the next UN Environment Assembly in March 2019.