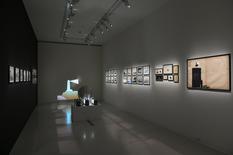 The Nouveau Musée National de Monaco (NMNM) is the first cultural institution to devote an exhibition to Eugène Frey, an artist who worked at the intersection between the visual arts, the stage and the cinema.

Born in 1864 in Brussels, Eugène Frey was a painter who very quickly refocused his attention in the direction of shadow theatre and light projections. In the early 1900s, he developed a unique new process: “light set projections” designed for theatre and opera stages.

Using a system comprising projector lamps that simultaneously project various painted images onto plates of glass, he produced highly innovative moving sets. At the invitation of Raoul Gunsbourg, he joined the Monte-Carlo Opera, contributing to its international success during the first quarter of the twentieth century.

The exhibition has been curated by Célia Bernasconi, Chief Curator at the NMNM, who was keen to draw parallels between the works of Eugène Frey and those of Portuguese artist João Maria Gusmão. Gusmão’s work is inspired by the old magic lantern techniques.

Over the museum’s three floors, visitors will be able to discover Eugène Frey’s various productions, from shadow theatre to the artist’s major works for the Monte-Carlo Opera, including the era’s “super productions” such as The Valkyrie and The Damnation of Faust, in dialogue with colourful projections by João Maria Gusmão.

A shadow and light exhibition waiting to be discovered until 20 May!