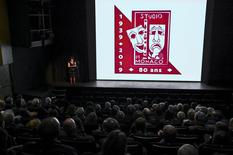 On 29 and 30 November, to mark its 80th anniversary, the Studio de Monaco performed in "Chat en poche" ("Pig in a Poke"), a farce by Georges Feydeau, directed by Ariane Alban, at the Variety Theatre. The delighted audience included H.S.H. the Sovereign Prince, who honoured one of the performances with His presence.

The Studio de Monaco, which is currently presided over by Béatrice Cellario and is in residence at the Variety Theatre, was founded in 1939 by a small group of theatre enthusiasts, headed by Guy Brousse, who at the time was considered one of the best theatre managers in France. Princess Antoinette, the sister of Prince Rainier, immediately accepted the Honorary Presidency and is now succeeded by her daughter, Baroness de Massy.

Classes are offered for the general public, for ages 7 to 99, in various artistic fields - theatre for "Youngsters," "Teenagers" and "Adults," both beginners and advanced, contemporary dance, flamenco and muscle-building classes, as well as singing lessons.

In 1957, the Studio also founded the World Amateur Theatre Festival, which attracts theatre companies from all over the world. The festival takes place every four years in Monaco.