Two examples of Tallero referred to as "with a Phoenix" by Honoré II are known, struck for the Levant, probably on the occasion of the marriage of the future Louis I.  Museum of Philately and Coinage and Cabinet of Coins and Medals, Marseille.

The Museum of Philately and Coinage is holding a spectacular exhibition of very rare and very beautiful old coins, accompanied by archive documents and precious historical works.

During the reign of Louis XIV, for a dozen or so years, Princes Honoré II and Louis I were the most enterprising players in an economic and commercial policy developed with the Ottoman Empire, known at that time as the "Levant," and now reduced to Turkey.  Even before the end of the Franco-Spanish war, culminating in the Peace Treaty of the Pyrenees in 1659, Prince Honoré II of Monaco had established commercial contacts with the authorities of the Levant.  From 1662 onwards, Colbert, who had succeeded Nicolas Fouquet as the "French Minister of Finance," devised an ingenious system in which the Princess of Dombes, a first cousin of Louis XIV, and Prince Louis I of Monaco, would be closely associated by issuing the monies required for commercial transactions.

The reality would exceed the objectives sought by the initiators of the project.  The Turks were so entranced by the coins depicting the portrait of the Princess of Dombes that they overvalued them and paid up to twice their issue value, turning them into a commodity.  As a result, Louis I of Monaco and later the Genoese and Tuscan lords of the Ligurian coast had millions of small silver coins, later known as luigini, struck in massive quantities, depicting outrageously imitated portraits of the Princess of Dombes.  Some unscrupulous speculators even cheated with the weight and title of their imitations to maximise their profits.  This proliferation of poor quality luigini led the Ottoman authorities to ban their circulation in 1669-1670.

This amazing story is brought to life in this prestigious exhibition. 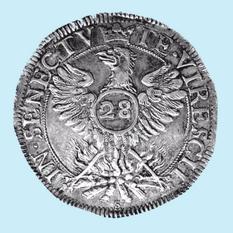