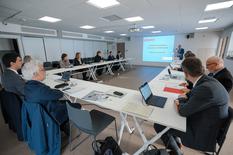 The Consultative Commission on the State Archives (CCAIP), created by the Sovereign Ordinance of 25 March 2021 on the State Archives, met for the second time on Friday 25 November, at the Oceanographic Museum of Monaco, in the presence of Mr Marc VASSALLO, Secretary General of the Government representing H.E. the Minister of State.

The activity report covering the first 20 months of work by the National Archives Preparatory Team (MPAN) was presented to the Commission members. The report highlighted the visits made to the Executive services and non-Executive entities, the support made available, and the productive collaborations initiated; the work done regarding the time taken to release the Executive branch’s public archives, the two open days held at the Central Records Office (SCADA) in 2022, which saw 110 visitors discover the Executive’s archives and the first private archival collections put together by the MPAN; the Principality of Monaco’s first ever representation at the annual conference of the International Council on Archives (ICA) in Rome, in September; and the participation in the Albert I centenary commemorations, with the MPAN jointly curating the exhibition “An Oceanographic Friendship. Albert I and Portugal, 1873-1920” at the Navy Museum in Lisbon.

Concerning the progress of plans to create a national Archives centre, a three-phase real estate project was outlined this year. The project will last around ten years, to allow it to be scaled up gradually. The first practical results will be seen in 2023 when MPAN takes up residence at new premises in Fontvieille, where archive storage will be shared with the Central Records Office (SCADA).

In addition to the presentation of the activity report, there were numerous other items on the agenda, concerning issues ranging from the release of the Executive’s public archives to the related matter of ongoing university research projects, donations of private archives to the State, and the launch of a new website for the Official Directory of the Principality (see inset below). The day also saw two speeches made by guest members: the National Council, invited to talk about the process of standardising its archive management, and Société des Bains de Mer, which was invited to discuss the adoption of new archiving procedures at the group. 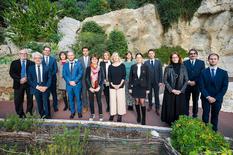 The recommendations made by the CCAIP included allowing easier access to World War Two sources for historical research purposes, and looking at solutions to allow collective special access to certain archives such as those relating to the aforementioned period, and in particular the files of individuals dispossessed and/or arrested and deported during the war, for their heirs and descendants, and for historical research.

The Annuaire officiel or Official Directory of the Principality of Monaco was first published in 1877, under the aegis of the Government. Distributed annually, it contains a list of official functions and businesses, various statistical and socio-economic information, and historical and tourist notices. A map was included until 1937. In the second half of the 20th century, the Annuaire gradually became more of an institutional and administrative resource. The last paper edition was published in 2004. It was replaced by a dynamic new website, which is regularly updated.

They can now be accessed by all (historians, genealogists, etc.) at the following address: https://archives-annuaire-officiel.gouv.mc/ .