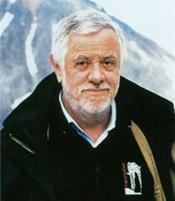 It was with great sadness that the Prince's Government learned of the death of Professor Yves Coppens, Chair of the International Scientific Committee of the Monaco Museum of Prehistoric Anthropology, an institute founded by Prince Albert I.

From the Muséum national d'histoire naturelle (National Museum of Natural History) to the Musée de l’Homme (Museum of Mankind), from the Collège de France to the Académie des sciences (Academy of Sciences), Yves Coppens was also a member of the Board of Directors of the Institut de Paléontologie Humaine (Institute of Human Palaeontology) and Commander of the Principality’s Order of Cultural Merit.

In his capacity as Chair of the International Scientific Committee of the Monaco Museum of Prehistoric Anthropology, he injected dynamism into the organisation and gave it substantial support.

A kind-hearted man, who was always accessible and ready to listen, Yves Coppens put his scientific expertise, his international networks and his talent as a scientific communicator in service of the Principality.

His longstanding and close ties to the Museum of Prehistoric Anthropology helped to push Monegasque archaeology beyond the country’s borders. Every symposium, exhibition, lecture and publication benefited from his watchful eye.

In 2022, the international members of the Monaco Museum of Prehistoric Anthropology’s International Scientific Committee will gather for the official opening of an exhibition dedicated to Prince Albert I, and this will be an opportunity to pay tribute to the memory of an exceptional man and Committee Chair.