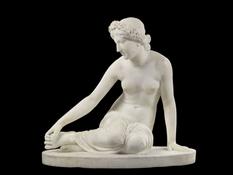 Two hundred and fifty years ago, on 19 March 1768, the internationally renowned Monegasque sculptor Giuseppe-Francesco Bosio, better known as François-Joseph Bosio, was born in Monaco.  On the initiative of the Ministry of Interior, the Prince's Government wished the 250th anniversary of this Monegasque sculptor, who had been honoured with the title of "First Sculptor to the King," to be celebrated, in order to make Monaco's cultural heritage better known and appreciated.  In this respect, it wished to involve various institutions in the Principality in these commemorations and combine their activities.

To mark this anniversary and raise awareness of François-Joseph Bosio and his work, several events are scheduled for 2018:

-        the making of three episodes of the "Art d'Art" programme, devoted to three works by Bosio;  these programmes, commissioned by the Prince's Government and coordinated by the Department of Cultural Affairs, were supported by SOGEDA.  These episodes will be broadcast on the French-language public channels France 2 and TV5 Monde.  They will also be presented to the public in the Villa Paloma's La Table des Matières;

-        the issue of an engraved postage stamp, with a face value of 0.95 euros, representing the sculptor and one of his major works - the Quadriga of the Triumphal Arch of the Carrousel, which was completed in 1828;  this stamp has been produced by the Monaco Stamp Issuing Office, based on a design by Céline Marin, winner of a competition organised by the Pavillon Bosio for former students;

-        the striking of a commemorative 2-euro coin, in Fine Proof quality, representing Bosio and one of his most famous works, The Nymph Salmacis – this coin is being issued by the Museum of Stamps and Coins via its web site www.mtm-monaco.mc ;

-        the "FJB on the Rock" exhibition, along the Avenue Saint-Martin, featuring 12 photographic compositions showcasing research and creative work by 2nd year students of the Pavillon Bosio, based on the work of François-Joseph Bosio;  these 12 photographic compositions, 2 metres long by 1.5 metres high, materialise and concretise the influence and impact of an 18th century work by relating it to a contemporary artistic approach though staging centred on the theme of costume, accessories and body posture;

-        the creation by artist Oliver Laric of an original work based on The Nymph Salmacis by François- Joseph Bosio;   the New National Museum of Monaco invited artist Oliver Laric to produce a version based on a scan of the original marble held by the New National Museum of Monaco.  This work, in polyurethane resin, will be on display at the Villa Paloma until 26 August;  by questioning new manufacturing, reproduction and distribution technologies, Oliver Laric addresses the productive potential of the copy and the remix and questions the concepts of author, authenticity and appropriation;

-        the publication of a special issue of the Connaissance des Arts magazine, devoted to Bosio, with a preface by H.S.H. Prince Albert II.  This issue was coordinated by the Louvre Museum's 18th century sculpture department and prepared in association with the Principality's Department of Cultural Affairs, the New National Museum of Monaco and the Archives of the Prince's Palace;  readers can thus familiarise themselves with the sculptor's works of art and discover his masterpieces, as well as works from the collections of the New National Museum of Monaco.  There is also a practical guide and a map of Paris listing Bosio's works;