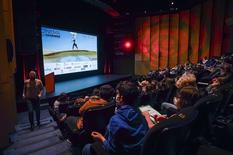 On Thursday 13 January 2022, more than 500 pupils in Monaco voted for their favourite short film as members of the jury for the Children’s Prize at the Cinema for Change Festival, supported by the Prince’s Government. The films for the Festival, now in its eleventh year, were screened at the Variety Theatre.

Known until last year as Le Temps Presse, the Cinema for Change Festival is part of a socially conscious cinema initiative and presents short films from around the world which tackle issues related to the 17 Sustainable Development Goals adopted by the United Nations in September 2015. Aiming to raise awareness around development and international solidarity, nine prizes will be awarded, including the three determined by young people (Children’s Prize, Secondary School Pupils’ Prize and Students’ Prize), which are supported by Monaco.

The Festival’s founder, Marc Obéron, presented the four short films in contention for the Children’s Prize to 26 classes from eight schools in the Principality. The votes of the Principality’s pupils will be added to those of other children on the jury who attend schools in France and in four partner countries of Monaco’s Official Development Assistance.*

For their part, first-year students at the Sciences Po Paris Middle East-Mediterranean Campus in Menton watched the four films shortlisted for the Students’ Prize on Thursday 28 November, before choosing their winner together.

This educational activity is part of a partnership agreement signed in 2014, under which the Department of International Cooperation and the Campus work together to raise students’ awareness of development issues and the fight against poverty throughout the world.

The Cinema for Change Festival award ceremony will be held in Paris in April.

Official unveiling of Lartigue fountain as it returns to Larvotto