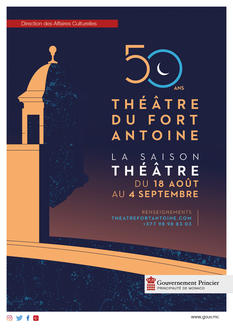 Fort Antoine is set to be the cultural event of the summer in the Principality. This year, the regular summer entertainment venue is celebrating the fiftieth anniversary of its open-air theatre.

The Prince’s Government is delighted to offer a series of performances, which will be free to the public. Seats are limited and can be booked via the Théâtre Princesse Grace box office.

The Department of Cultural Affairs was keen to mark this year’s anniversary in two separate phases, showcasing the Principality’s major cultural institutions from 8 July to 7 August, then inviting audiences to enjoy the traditional theatre season from 18 August to 4 September 2020.

The Department of Cultural Affairs is inviting the Principality’s cultural institutions to celebrate Fort Antoine’s fiftieth anniversary with an eclectic programme over 10 evenings, featuring readings and encounters, music, theatre and film screenings.

Desires of Philosophy, presented by Raphael Zagury-Orly and Joseph Cohen.

Lockdown letters – An evening of readings.

Six performances for an “anniversary” season, focusing on theatre and music.

Written and directed by Elise Chatauret

Based on the book by Thomas Bernhard, by and featuring Nicolas Bouchaud

Directed by Eric Didry, with artistic collaboration from Véronique Timsit

By and featuring Geoffrey Rouge-Carrassat

* The box office opens on Monday 29 June at Théâtre Princesse Grace. Tickets can be reserved from Monday to Friday, 12 pm to 6.30 pm, and must be collected in person. Details are available on the website www.theatrefortantoine.com .