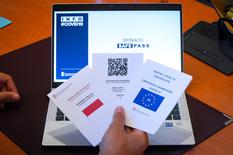 The Prince's Government had announced that a health pass would be introduced by 5 July. Thanks to the efforts of the State departments, it will now be possible to issue the health passport from Friday 2 July.

Pierre Dartout, Minister of State, is delighted:  "Monaco is in line with the major European countries.  From Friday, people who are vaccinated or have tested negative will receive the QR code for the Health Pass, which will enable them to travel and to access major events."

People who are vaccinated or tested from 2 July onwards will receive their health pass automatically after the last dose of vaccine has been administered or when the test result is issued.

People who are already vaccinated or have recovered from COVID before 2 July (PCR test or antigen test showing that the holder tested positive more than 15 days and less than six months ago) can apply for their health pass by filling in an online form at the website www.covid19.mc .

As a reminder, people can choose :