COVID-19: summary of checks carried out during weekend 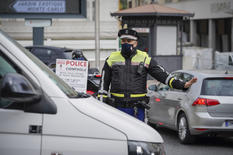 As announced by the Prince’s Government last Wednesday, the Police Department stepped up checks on access to the Principality on Saturday 27 and Sunday 28 February.

The aim of these checks was to regulate traffic and avoid a potential influx of people from France, given that the rules on movement as part of efforts to combat COVID-19 are different in the two countries.

“This is about both guaranteeing the sovereignty of Monaco, which has decided not to impose a weekend lockdown, unlike its French neighbour, and to demonstrate a certain solidarity with the French authorities. Conducting checks on those entering the Principality de facto helps to ensure compliance with the French rules, which limit travel to five kilometres and one hour,” emphasised Minister of State Pierre Dartout.

“All Alpes-Maritimes residents from communes in lockdown that are located more than five kilometres from Monaco were refused access to Monegasque territory. Some latitude was permitted for residents of neighbouring communes who were, for example, coming to Monaco to shop for basic necessities, as authorised by the decree issued by the Prefect of the Alpes-Maritimes,” explained Patrice Cellario, Minister of Interior.

Nearly 70 police officers were mobilised across the two days to carry out these checks. They verified that each non-resident wishing to visit the Principality had a hotel reservation and a negative PCR test conducted within the last 72 hours. The checks were carried out on those arriving by road, rail and air.

The operation focused on the period between 10 am and 5 pm on both days. It should be noted that the volume of traffic was significantly lower (a reduction of 45%) than the previous weekend.

In total, more than 4,000 checks were carried out, including:

It is notable that, despite the large number of checks carried out, no offences were recorded in restaurants. This illustrates that people are abiding by the measures that have been enacted, and that compliance with the weekend lockdown was relatively high, a fact corroborated by the low number of violations.

Similar checks are set to be carried out again next weekend.