The Principality and the Grand Duchy Linked by a New Bilateral Agreement: Pierre Dartout and Xavier Bettel Sign an Agreement to Create an e-Embassy of Monaco in Luxembourg 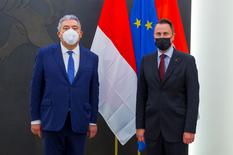 Although safeguarding sensitive computer data was imperative for the Principality, this could not be envisaged on Monegasque territory, which is too small with regard to the risk of a natural disaster or cyber-attack.  "This Agreement is the first step towards a strengthened partnership in the digital field between the Principality of Monaco and Luxembourg. I am delighted with the arrangement proposed by our Luxembourg partner, under which the Principality will benefit from a solution for safeguarding this data, while preventing any major risks" emphasised H.E. the Minister of State, Pierre Dartout.

The main proponent of this agreement, Frédéric Genta, Country Chief Digital officer, who attended the signing ceremony, was delighted with the outcome of this project, which further extends the roll-out of secure digital infrastructures in the Principality, such as the Sovereign Cloud, "This e-Embassy was designed and created in Luxembourg, but with our security standards, so as to ensure the sovereignty of our national digital data."

This meeting was also an opportunity for the two delegations to discuss post-Covid economic recovery plans, focusing on three major areas that the two countries have in common - they both have a modernised State, offer an attractive, sustainable economy and have successfully implemented their digital transformation.

Moreover, Pierre Dartout and Xavier Bettel have agreed to strengthen their cooperation in the field of digital technology. The two Heads of Government announced the establishment of a dedicated committee that will enable the various departments of the administration to hold discussions and develop joint projects, in particular cooperation on applications relating to digital identity and the Sovereign Cloud.