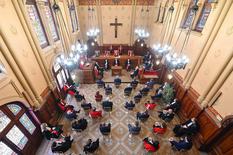 The traditional Autumn Session Formal Sitting of the Courts was held at the Palais de Justice on Thursday 1 October, in the presence of H.S.H. the Sovereign Prince, together with the Secretary of State for Justice. The Minister of State, the Archbishop of Monaco, the President of the National Council and numerous other dignitaries were also in attendance. The sitting was preceded by a celebration of the Mass of the Holy Spirit at Monaco Cathedral.

To ensure compliance with health measures and limit the number of people in the Palais de Justice, a live transmission of the sitting was broadcast at the Oceanographic Museum in Monaco.

The formal sitting marks the beginning of the 2020/2021 judicial year.

The session’s opening speech, on the topic Civil procedure, from supporting law to fundamental law, was given by Mr Yves Strickler, a full member of the High Council of Judges and Prosecutors and the Commission for the Revision of Legal Codes, a senior faculty of law professor and a professor at the University of Nice Sophia Antipolis.

After highlighting the events that have marked this past year in turn, Brigitte Grinda-Gambarini, First President of the Court of Appeal, recalled that during its 84th Plenary Meeting in late 2019, the Council of Europe’s Group of States against Corruption (GRECO) adopted the compliance report on Monaco at the end of the evaluation round focused on preventing corruption in respect of members of parliament, judges and prosecutors.

Finally, Ms Sylvie Petit-Leclair, the Public Prosecutor, gave a speech in which she shared the progress made by the justice system in combatting the abuse of vulnerable persons as well as economic and financial crime, two of its priorities.

1,200 Laptops Have been Distributed to Pupils in the Principality - The Digital Secondary School - A New Phase in the Future of National Educati